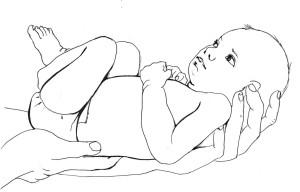 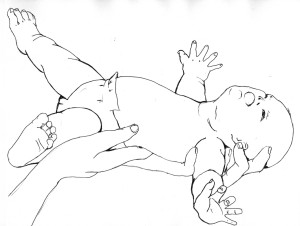 When the TLR is retained, every time the child moves his head, his muscle tone changes in response, which will affect his balance.

Balance and vision are connected on the same loop. Information from where the body is in space goes to the brain (vestibular nuclei) and then to the eyes. Information also goes from the eyes through the brain and back to the body so the adjustments can be made in the body’s position. A retained TLR gives faulty messages between the brain and the receptors that determine where the body is in space (proprioceptors), which affects the eyes.

The child does not have a stationary reference point so his judgment of space, distance, depth and speed will be affected. Not only does this affect the child’s vision, but also affects his sense of where his body is in space and his sense of direction, up vs. down, right vs. left.

With a mismatch of information between the eyes and the vestibular system, the child with a retained TLR does not know where his head is in space, affecting his feeling of security with respect to gravity. When he moves his head, he might feel dizzy or the feeling of falling, leading to a fear of heights.

When a baby has a retained TLR, bending its head backwards will cause the legs to straighten out. This will affect the baby’s development of creeping and crawling on hands and knees. This may lead to a retained symmetric tonic neck reflex (STNR). If the baby is unable to crawl, this will further impede the development of eye tracking, using two eyes together (binocularity), and focusing, later affecting the child’s academic abilities and coordination.