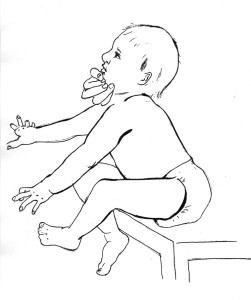 Even though the STNR helps the baby attain the hands and knees position, if it is retained, the baby is usually unable to crawl. He might bear walk (hands and feet instead of hands and knees), scoot while sitting, or go directly to walking. If the baby is able to crawl, it is often an atypical crawl, with elbows locked or feet may be up off the floor. The crawling will be unsynchronized.

It is theorized that the STNR assists in vision training, changing the focus from near to far. If the STNR integrates, vision is trained further, allowing the baby’s eyes to cross midline, and training eye-hand coordination. It has been observed that babies who have never crawled (possible retained STNR) often have reading difficulties.

When sitting at a table or desk, when the child with a retained STNR looks down, his arms bend. This child will appear to be in a slouched position or stooped over, sometimes nearly lying on their desk.

A retained STNR is significantly correlated with ADHD and ADD.

Eye/hand coordination is affected. Vertical eye tracking is also affected, causing the child with an STNR to have difficulty with ball sports.