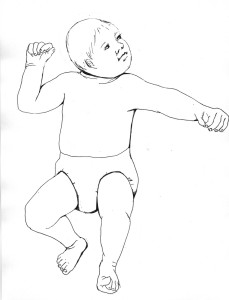 If the ATNR persists, the child will be unable to use a cross pattern of movement, resulting in either not being able to crawl, and later, will not be able walk with a cross pattern arm swing.

The child will not establish a preferred hand or foot, resulting in hesitancy in response movements.

The child with a retained ATNR will be unable to manipulate objects in midline or pass objects from one hand to another. The child will want to perform tasks on one side of the body at a time. This also results in hesitancy in moving eyes across midline, and the child will have difficulty reading.

When a child turns his head to look at a page, his arm will want to straighten and his fingers open. It requires much effort to override this when the child is holding a pen or pencil and attempting to write, usually at the expense of cognitive processing.